NEWS
What you don’t know about Aadhaar

NEW DELHI: The 12-digit unique identity, Aadhaar, provides identification to more than a billion Indians. Its ability to uniquely identify individuals and its digital interface have made it a compelling identification platform.

Even though the government is taking various measures make it a necessity to avail of financial services, subsidies and so on, not many people are aware of the Aadhaar related nitty-gritties. A recent study, State of Aadhaar, conducted by IDinsight, a global development analytics firm, found that only 7 percent were aware of the full Aadhaar authentication process.

The survey covered 2,947 rural households in 21 districts across the states of Andhra Pradesh, Rajasthan, and West Bengal.

While 85.1 percent of the people surveyed were aware of fingerprint authentication, less than half of them, i.e., 41.6 percent, know that Aadhaar enrolment is free of cost.

With regards to safety of data, although many are afraid about the possibility of misuse of information linked and stored, not many know about the precautionary measures that can be taken.

To prevent misuse of Aadhaar data, the Unique Identification Authority of India (Uidai) provides a mechanism to lock the biometric information. Biometric information refers to the iris and finger prints scans which are used for authentication. The survey notes that only a lowly 3 percent Aadhaar cardholders are aware of biometric locking and unlocking.
Here’s a snapshot: 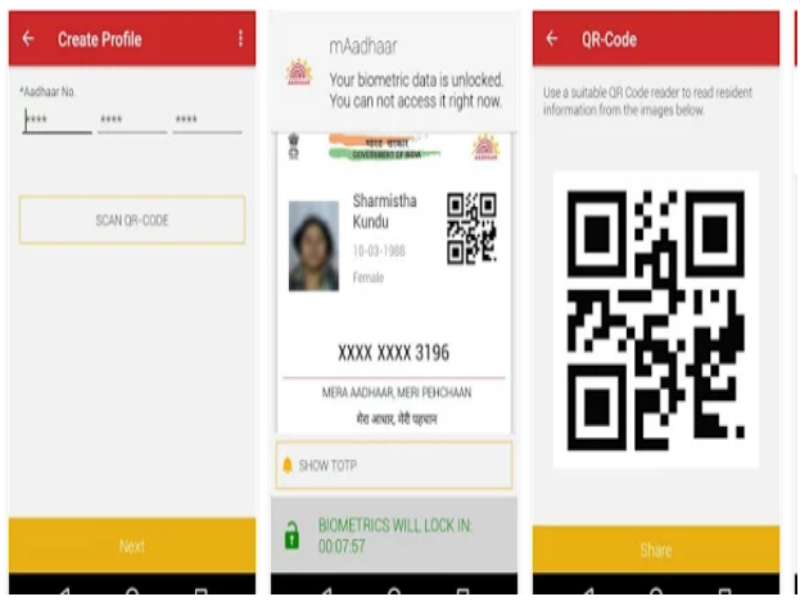 This is of significance because of the since the government made it mandatory to link PAN card with Aadhaar for income tax returns to be processed, many were unable to do it due to mismatch in data in both the IDs. Further, since many people couldn’t comply to this directive, the government had to extend the Aadhaar-PAN linking deadline a few times. As per the UIDAI website, the turnaround time for Aadhaar updation is 90 days.

Exclusion from Public Distribution System due to Aadhaar related issues
Not just the errors, the report also highlights that exclusion from receiving benefits due to Aadhaar-related factors have been significant. While the government has repeatedly insisted that no beneficiary should be denied benefits due to lack of Aadhaar, the IDinsight report suggests that on the ground this is not what is happening.

According to the study, 0.8 percent, 2.2 percent, and 0.8 percent of Public Distribution System (PDS) beneficiaries in rural Andhra Pradesh, Rajasthan, and West Bengal, respectively, are excluded from their entitlements due to Aadhaar-related factors. This extrapolates to about 2 million individuals a month. However, non-Aadhaar reasons, such as ration unavailability, contribute much more to exclusion from PDS. Aadhaar-related issues refer to non-seeding of Aadhaar and mismatch in biometric data.

Overall, monthly exclusion from PDS in Rajasthan is 9.9 percent, whereas it is 1.1 percent in Andhar Pradesh.

Ajay Bhushan Pandey, CEO of Uidai, said, “PDS exclusion due to failure of local administration, should be taken very seriously by the concerned agencies. They should ensure that not a single beneficiary is denied. The Aadhaar Act and Government instructions provide for alternate means of identification for genuine beneficiaries who encounter problems in authentication.”

Section 7 of the Aadhaar Act states that Central or State Governments can make possession of an Aadhaar number or Aadhaar authentication mandatory for receipt of subsidies, benefits or services funded out of the Consolidated Fund of India. At the same time, the section also states that an individual who has not been assigned an Aadhaar number, shall be enrolled for Aadhaar and offered an alternate and viable means of identification for receipt of subsidy, benefit or service till the 12-digit biometric number is assigned to him.

Aadhaar based e-KYC has limited reach

The study found that Aadhaar’s digital usage for financial inclusion (e-KYC) has had limited reach, while its analogue version (the letter or card) has been an enabler of inclusion, particularly in opening bank accounts. The physical Aadhaar card is much more widely used to open bank accounts than its digital version. As per the survey, 67 percent of bank account holders used their Aadhaar letter to open their most recent account, while only 17 percent used e-KYC. Ronald Abraham, partner at IDinsight, says “While the ease of Aadhaar based e-KYC needs to be promoted, the government also needs to safeguard the data of analogue users, which is as high as 67 percent.”

People are still okay with Aadhaar

Despite all these issues, the study found that 87 percent of people approved of the government’s mandatory use of Aadhaar, while 76.9 percent approved Aadhaar’s mandatory use by the private sector. 77 percent of respondents approved of the mandatory linking of Aadhaar to services, including mobile.
Although the respondents are fine with mandatory linking their Aadhaar with various services, they do value their right to privacy over everything else. Over 96 percent of respondents valued privacy and think it is important to know what the government will do with their Aadhaar data.
Source by:-gadgetsnow
Share: